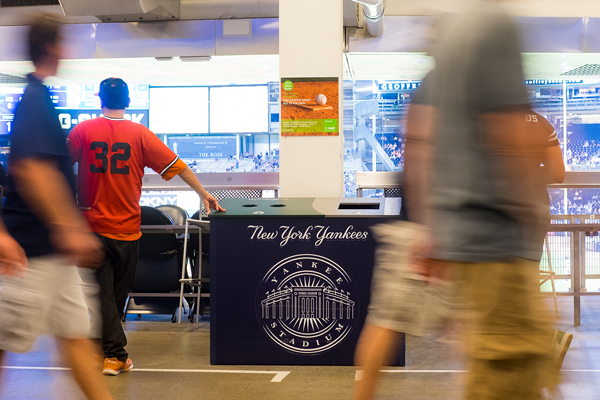 This is impossible, how can it be? There is an estimated 16 million cubic feet of refuse left at stadiums every year, which would fill Yankee Stadium with 2 million cubic feet left over. However, big-league and college sports organizations are going green these days, and not only that, but they are even competing with each other about it. The use of solar and wind energy. Innovative waste management policies. There is even a difference in the food. Choose USDA-certified organic hot dogs, sustainably harvested seafood, or seasonal vegan salads. Leftovers, wrappers, and utensils can be composted after use.

Having composted and recycled for years, the Yankees aren't exactly new to this. The old-fashioned way was to have three receptacles - one for plastic, one for compost, and one for trash.

It must be difficult to deal with that much complexity, right? The Sox are driving you up the wall (imagine!) and you're supposed to figure out if this wrapper is "Plastic" or "Trash"? That ain't happening!

Nowadays, you only see one recycling station. With the Yankees logo and the blue and white colors, it's a handsome piece. There is a color-coding system. There is a simple sign that tells you exactly what to do. You put the bottles on the green side, with the small round holes on the side. The compost goes in the gray side, with the square hole. Compost is anything that isn't a bottle. Now you can yell at the Red Sox once more.

New recycling stations follow best practices for recycling container design and were manufactured using LEAN manufacturing techniques, but fans needn't know that. They don't need to know that 250 of these Claremont Double Recycling Stations were customized, produced, and delivered to Yankee Stadium in just three weeks by Trash Cans Warehouse. Because the bins can be accessed from the side, custodians won't have to lift the bins out, thus reducing the workload.

Nothing is trashed. Defining and designing it out of existence was the goal. Many items that used to be trash have now been composted, and many things that used to be compost have been turned back into food.

Following the federally recommended hierarchy, leftover food should be donated, composted, and then used for energy. Thus, donations to local food rescue organizations are on the rise, which is a trend in the sports industry as a whole. These donations consist of ready-to-eat unopened, unused food products which are a step up from peanut butter and canned tuna, which are always welcome but easily tiresome. Taking part in this program allows teams to give back to the host community, including people who might not have the opportunity to attend a game otherwise.

The Green Sports movement has been growing for years, but government mandates have made it more urgent. New York City's Zero Waste Plan aims to reduce disposed waste by 90% by 2030 compared to 2005 levels. The government has mandated that large venues reduce waste disposal, so everyone is incentivized to try new things.

The Bill Emerson Good Samaritan Food Donation Act, signed by President Bill Clinton in 1996, facilitates food donations nationwide. While it is well known that the 'sell-by' date on food packages often has little to do with its usability, corporations have historically felt safer throwing out food than risking a lawsuit.

Nevertheless, the Bill Emerson Act encourages common sense food handling techniques while acknowledging the fact that perfectly good food is tossed out every day. As a result, businesses such as sports franchises can donate prepared food without worrying about being sued. As a result, liability exposure is standardized and a floor of gross negligence or intentional misconduct is established.

Nevertheless, that only applies to food that has not been touched. What about the half-eaten hotdog, the leftover peanuts, and the crackerjack? The Yankee Stadium compost bin is where they go. Besides saving money, it may also attract more fans. In 2015, The Shelton Group surveyed Americans, finding that nearly one-third would be more inclined to attend a game if the stadium recycled and composted. One-fifth would also purchase more food at the game.

That brings us back to the Red Sox. This year, Yankee Stadium won the Green Sports Alliance's Environmental Leadership Award, and certainly, the Yanks have some of the best recycling bins in sports, and maybe, just maybe, they're on the verge of a World Series championship. Once again.